first paddle in the line up.

The approval is great news says Chris Evans, the company owner and founder. “It’s no easy task to develop, design and then completely manufacture our paddles start to finish here in Ontario. USAPA certification is a big deal for us and we are proud of our success in bringing our leading edge hybrid paddles to market.”

Evans says the new Retro 86T was developed for players that need a more agile paddle with more reach. “It’s designed for those that don’t play the whole game at the net.”

Brick House Paddles focuses on developing composite pickleball paddles, with either a  fiberglass or carbon fiber substructure, and then incorporating a natural wood playing surface.

According to Evans, this gives their paddles a distinctively comfortable feel and look, while making them unique in the market.

“We want to develop paddles that help players play better and play more. No one plays pickleball for just an hour. So making paddles that are comfortable to play for longer periods is a huge part of developing our paddles. Incorporating the natural wood playing surface is key to delivering on our objectives.”

Evans started developing his paddles during covid and launched his business officially in 2021. “ Maybe not the best time to launch a new business but I did have lots of time for R&D.” he joked.

After gaining momentum locally and with a lot of help and support from fellow pickleball players, Evans expanded his distribution and now sells his paddles right across Canada and into the US.

When asked what’s next for his business

“Lots, but we have to keep some things quiet. I can tell you we have several new designs in development and expect to further expand our line of USAPA paddles through 2022, while focusing on keeping our paddles 100% designed and manufactured in Canada.”

Brick House Paddles are located in St Marys Ontario and can be reached via their website, www.brickhousepaddles.com.

From a pandemic pickle, an area sport equipment maker is born

‘The sport just keeps getting bigger and bigger, and I’m happy being a smaller, niche player at the moment’

Author of the article: 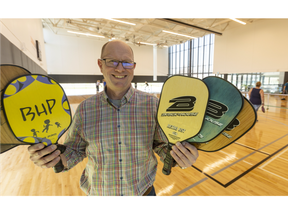 Idled by the pandemic, Chris Evans turned what started as a lockdown activity into a booming new business supplying the fastest-growing sport in North America.

The St. Marys man formed Brick House Paddles, making game paddles for the growing pickleball industry – and he’s now getting attention from the USA Pickleball Association, which has thrown its support behind his creation.

“The sport just keeps getting bigger and bigger, and I’m happy being a smaller, niche player at the moment,” Evans said. “We want to develop paddles that help players play better and play more. Making paddles that are comfortable to play for longer periods is a huge part of developing our paddles.”

Combining elements of other racket sports like tennis, ping pong and badminton, pickleball is played with a perforated plastic ball on a badminton-sized court with a dividing net in singles or doubles matches.

According to the Sports and Fitness Industry Association in the U.S., 3.46 million people played the sport in 2019. That grew to 4.2 million in 2020 and to 4.8 million in 2021, a two-year growth rate of more than 39 per cent. That makes pickleball the fastest- growing participation sport in the U.S.

In 2020 Evans was laid off from his Ontario sales job with a West Coast-based fireplace manufacturer. He was 59 years old, and scrambling to find work at the outbreak of the pandemic.

“At that age the walls go up for meaningful work. My wife and I started playing pickleball and I didn’t like the way (the paddles) felt, the way they played,” Evans said.

Evans had done woodworking and had worked with composite materials like fibreglass, doing boat repairs, so he began experimenting with making his own paddles.

“I looked at them and said, ‘I can build this.’ When I put wood veneers on it, it changed the way it looks and plays. I showed it to people on courts and they loved them. People started asking me to make one for them.”

He tapped into his past experience working with wood and composite materials as well as sales and started Brick House Paddles.

“I wanted to do something I enjoy and I love doing it. People like them and that gives me a sense of pride. I just said, ‘I should go all in.’ ”

He reached out to local retailers and that began slow, steady growth. “We had uptake.”

Humphrey Chung goes for a backhand during a doubles game of pickle ball with teammate Judy Rogers at the East Lions Community Centre in London. Mike Hensen/The London Free Press

He sent his paddles to the USA Pickleball Association and his packaging now bears its seal of approval.

“It was a milestone,” he said of approval from the U.S. governing body. “It shows people we’re serious about it and committed to developing our product, that we’re not just one-shot wonders. They’re very interested in what we’re doing here.”

What really got buyers’ attention was the quiet tone of the paddles. Most paddles make a loud sound when they come in contact with the plastic ball, and it’s a fast-paced game so a packed court in a suburban area can prove annoying to area residents.

“It has a natural noise-dampening quality because of the wood veneer,” Evans said of the ash, cherry or maple paddle material.

He now makes four styles of paddles and a junior model and is about to launch another, he added.

This year Brick House will likely sell more than 600 paddles, more than double the about 250 it sold last year. “I know it doesn’t sound like a lot, but I’m not out to conquer the world and make 1,000 paddles a month,” Evans said.

He’s relieved the sports and activity market now appears to be easing out of the pandemic lockdown, meaning there may be a serious demand for his paddles.

“It was tough. We were in lockdown, with few facilities where it could be played. It was tough to gauge if there was an opportunity, but I had a lot of time for research and development,” Evans said.

Bob Riehl, who owns and operates Bob’s Racquet Works in Goderich, an online racquet sports equipment retailer, has been selling pickleball gear for 10 years and likes what he sees from Brick House Paddles.

“He has a good thing going. I like the way it feels and it’s classy-looking,” Riehl said. “I like the way the ball feels off my paddle. I prefer them. There are hordes of paddle makers all over the world, but my clients like to buy Canadian first.”